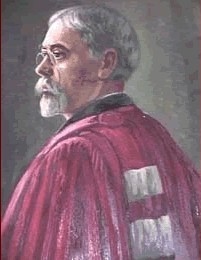 Here, you'll be able to locate information and resources in French and English concerning the work of Maurice Hauriou (1856-1929), the great administrative and constitutional lawyer, philosopher and dean of the Law Faculty at the University of Toulouse.

In particular, we'll be highlighting the Theory of the Institution developed by Hauriou and his fellow "institutionalists", particularly Georges Renard and Joseph Delos.

Interestingly, Hauriou as well as Renard and Delos, both of whom later became Dominican priests, all belonged to the Sillon movement founded by Marc Sangnier.

Indeed, it is no exaggeration to say that it was the numerous lawyers formed by the Sillon movement who were responsible for the great influence of the Theory of the Institution in the French legal world for much of the first half of the 20th century.

This is not surprising because, as we will see on this site, Hauriou in fact crafted his Theory of the Institution around the sillonist definition of democracy as "le système qui porte au maximum la conscience et la responsabilité de chacun" - the system which maximises the consciousness and the responsibility of each person.

Thus, combating the "corporatist" theories linked to the fascist ideologies of the early 20th century, the sillonnist lawyers sought to promote a democratic theory of the institution.

In this sense, this site can be considered as our homage to the democratic struggle of our "institutionalist" predecessors.

Unless otherwise indicated, the various items and articles are by me.

The Theory of the Institution